At Prima, we pride ourselves in delivering timeless designs
tailored individually to maximize space functionality,
boost aesthetics, and boast personality.

The first step in the process of creating your dream kitchen, bathroom, living room, or storage space begins with the collaboration between the client and our designer team. Whether done remotely, or in person, the first step aims to understand what aspects of functionality and aesthetics fit within our clients’ dream space, and how we can maximize the potential of any space through optimal design methodology based on the clients’ needs and desires.

The design follows the conceptualization from the first meeting. Understanding how our cabinets work allows us to fit them around a space based on your needs, putting both functionality and aesthetics at the forefront. After a baseline design is curated, our team at Prima works with you to further refine the details, and address the most important elements that separate a good kitchen from a great one. The design flow process is generally organic on both ends, allowing for a multitude of revisions of concept, and alterations of layouts and finishes.

Following the completion of the final design process and approval from the client, our team takes over the entirety of the logistical duties for the order, configuration, manufacturing, shipping and handling, as well as customs clearance between Germany and the United States. Our team completes all technical packets for the ordering of the material and ensures their fitting capabilities and compliance with our quality control team in Germany over the span of a week.

After receiving clearance, all your new kitchen material is manufactured in our partner’s factory in Germany for a lead time of approximately 10-14 weeks. Once completed, our team ensures the proper packaging and handling of your completed pieces with our forwarders, as well as their placement in a singular container, not shared with any other products that are not arriving for Prima, to ensure quality control throughout the transportation and minimize the probability of over-the-sea damages. Lastly, once the container ship arrives on U.S. soil, we schedule and carry forward the pick-up and delivery of your new kitchen or living space through U.S. customs and finalize all clearances before the final delivery.

After clearing customs, we’re at the final stretch before your dream cabinets are delivered! At Prima, we handle the last mile completion by reloading the cabinets from storage or customs to our trucks, then delivering them directly to your home! This ensures the last mile quality control of the process is handled internally. Upon delivery, we begin the installation. As with any major interior project, the installation is the most crucial step of all.

A controlled design process ensures that we will face no surprises in the end, that all ordered items will fit perfectly into your space, and that any and all alterations are planned ahead of time if need be performed. At Prima, we complete every single installation internally without ever outsourcing, boasting two decades of experience in installing German kitchen cabinets for perfect outcomes.

Prima Kitchen New York is proud to be the exclusive retailer of Ballerina Kitchens in the Northeast. Ballerina Kitchens is the leading manufacturer in German kitchen cabinetry, harmonically combining creative designs, German engineering, and innovative technology to reshape the way we think and interact with kitchens today.

Striving for excellence, all our cabinetry is certified via the LGA QualiTest GmbH GS mark for safety measures. Ballerina is also certified according to the standards of the largest institute for the safeguarding and marketing of sustainable forest management, the PEFC, which guarantees that wood products originate from sustainably managed forests.

The wood materials correspond to the formaldehyde-reduced CARB2/TSCA P-2 standard and are environmentally friendly, sustainable, and ensure a healthy indoor climate. 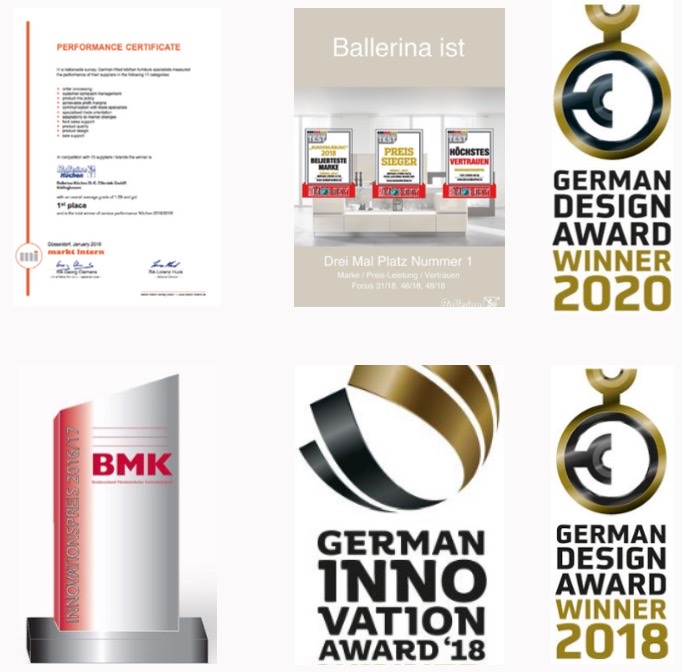 Ballerina Kitchens was also given the GOLD in Customer Favorite 2018 evaluated via a nationwide consumer survey by the Deutschland Test and FOCUS Money. The survey recorded over 53 million customer remarks for over 3,000 companies in 146 categories.

The jury of the German Design Council pronounced Ballerina Kitchens as the Innovation Award Winner in 2018 for the Y-Kitchen design. The award recognizes the commitment to innovative and unique approaches to cleverly designed forms of function.

The jury of the German Design Council pronounced Ballerina Kitchens as the Design Award Winner in 2018 and 2020!

“I recently completed a complete remodel of our kitchen and bathroom and I worked with Prima Kitchen and the experience from design to completion was an absolute joy. The entire team is professional, kind, thoughtful and supportive throughout the project. I highly recommend Prima Ktichen for your next project. But don’t just take my word for it. Check out these amazing pictures of my new kitchen and bathroom.”

“I recently had my basement remodeled and turned into an apartment. I had Prima Kitchen design and install the entire kitchen, and I couldn’t be more pleased. Besnik is extremely professional, precise, and timely. The woman at the showroom was also extremely helpful, recommending the best options given my preferences and budget. The kitchen came out absolutely marvelous, I’m overjoyed and could not be more pleased!”

“From the moment I walked into the showroom I knew this was the kitchen I wanted. Natasha and Aris were fantastic to work with. Natasha heard everything I said, and worked tireless to design my dream kitchen. Her designs were perfect. Once the cabinets arrived, they were quickly and efficiently brought inside. Then, before my eyes, Aris and his father worked for five straight days installing. The work was clean and done to perfection. Natasha’s design appeared before my eyes. Everything is perfect and Natasha came to make sure. Prima Kitchen was a pleasure to work with and the end result is perfect. I could not be happier. Will update with photos when the counter top is installed.”

“We finished last week the remodelling of our daughter’s bedroom which consisted in the complete renovation of her closet as well as the installation of a bookcase, framed around a window, and some bookshelves. Also, a big custom made cabinet was installed in our dining room. All the work was done on time and the finishing was as expected. We are very glad with the work done and enjoyed the professionalism and courtesy of anyone involved in the project. Therefore, we highly recommend Prima Kitchen to anyone interested in their services. ”

“I give my highest recommendation to Prima Kitchen. From design to material selection, production and delivery everything was A++ professional, timely and at a reasonable price. They are truly focused on the customer experience and satisfaction.”

“Love the products and ideas. The service was great.”

“Excellent craftmenship and executed in a timely and professional manner. I would have no problem using their services again in the future.”

“Excellent family business. The kitchen we got was top quality and super-modern. Would highly recommend. They really care about making sure everything is exactly how you want. No problem too small.”

“A great show room with amazing and niche products. Strongly recommend for anyone in the city looking for an elegant kitchen fit out! No brainer. Also, the customer service was quality. Very friendly and welcoming business.”

“This is the most professional team we’ve ever worked with: Perfection with no delays at all stages (design, installation, service, and advice), lovely people, and the product is just great. Highly recommended for kitchens, bathrooms, and closets.”

We use own and third party Cookies to develop statistical information and show custom advertising through browsing analysis sharing it with our partners. By using Primakitchen.com, you agree to our use of cookies.
OK
Manage consent

This website uses cookies to improve your experience while you navigate through the website. Out of these, the cookies that are categorized as necessary are stored on your browser as they are essential for the working of basic functionalities of the website. We also use third-party cookies that help us analyze and understand how you use this website. These cookies will be stored in your browser only with your consent. You also have the option to opt-out of these cookies. But opting out of some of these cookies may affect your browsing experience.
Necessary Always Enabled

Performance cookies are used to understand and analyze the key performance indexes of the website which helps in delivering a better user experience for the visitors.

Analytical cookies are used to understand how visitors interact with the website. These cookies help provide information on metrics the number of visitors, bounce rate, traffic source, etc.

Advertisement cookies are used to provide visitors with relevant ads and marketing campaigns. These cookies track visitors across websites and collect information to provide customized ads.

Other uncategorized cookies are those that are being analyzed and have not been classified into a category as yet.